Anne-Marie made her solo Australian debut in Sydney on Tuesday night to a sold out Metro Theatre. The rising British pop star is straight off the back of an extended stint as Ed Sheeran’s supporting act around Europe and America, but has finally made her way down under to perform two very special sold out shows, promoting her April debut album release ‘Speak Your Mind’

Her support act, Los Angeles based Australian duo NAATIONS, certainly got the crowd jumping early. Playing a mixture of tracks known to the audience and tracks they may not have heard certainly paid off as they built hype for the main act of the night. Their performance of their Duke Dumont collaboration ‘Real Life’ was a highlight of their set, as the crowd shouted back the chorus.

Following NAATIONS’s set came the main event of the night. Entering the stage to a crowd shouting her name, Anne-Marie opened her first Australian headline show with album opener ‘Cry’. Straight off the bat, she was jumping around the stage, interacting with the crowd. This was followed by one of her oldest releases, ‘Do It Right’, which proved that her fanbase has done their research as they shouted the lyrics back.

Her newest single ‘Perfect’ and last single ‘2002’ both had the entire crowd singing at their loudest, encouraged by Anne-Marie’s playful mannerisms. Crowd favourites throughout the night included  ‘Trigger’, as she taught the crowd the chorus and had them sing it back to her and ‘Bad Girlfriend’ which had Anne-Marie showing her skills as a ‘real musician’ (her words) by using a electronic sound machine. She took a moment to sit on the edge of the stage whilst singing ‘Then’, as she delved into what is arguably her most emotional song on her debut album, bringing herself and much of the audience to tears.  Her final song, her collaboration with Marshmello, ‘FRIENDS’ predictably had the crowd jumping and screaming until the very last moment.

Anne-Marie’s Australian debut was a high energy, interactive show, giving us just a taste of what the rising British pop star has to offer, as well as showing that the Australian support for her is only growing.

Anne-Marie will be back in the country next March and April, playing shows in Brisbane, Sydney, Melbourne, Adelaide and Perth. Tickets go on sale Tuesday 23 October, all details can be found here 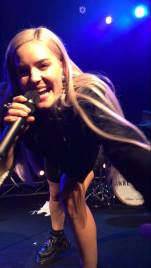 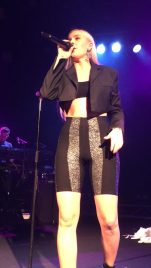 Enjoy some kind crappy photos from the night, taken on my phone

Hi, I'm Jess! After four and a half years of uni, I'm finally out on my own so this may turn into absolutely anything. Stick around. View all posts by Jess Oehm